Down syndrome is a genetic condition whose incidence is the same world over – 1 in 800 live births. But what is different is the way they are considered which varies from country to country. DSFI today played host to Mr. Edward Bradley, a sibling of a person with Down syndrome, Ms. Victoria Bradley. He is the founder of the D2020 World Project which is a project helps in raising awareness about Down syndrome around the world. He wants to give a more modern, accessible and educational approach on Down syndrome to people worldwide who just know a little or nothing about it.

Between January and April 2020 he plans to travel the world during 90 days hoping to meet people and visiting foundations in each country. He has finished Turkey and today on his last day in India, he came to the DSFI center at Chennai. He next plans to visit Thailand, Hong Kong, Australia, New Zealand, French Polynesia and the United States hoping to meet people with Down syndrome and their families to have a moment to talk about what they do, what their foundations do and how society includes them in our everyday life.

When he came to the DSFI center, he was amazed at the positivity of the parents and the children. India with its multiple languages and cultures has grown in leaps and bounds with respect to accessibility for persons with special needs. This was something new for Mr. Bradley. After Turkey where he could meet only a few people, meeting close to 50 parents at Chennai was an awesome experience. Mr. Bradley spoke to the parents and answered their question with respect to lives of persons with Down syndrome in Spain where he is currently based.

Inclusion – whether at school or at workplace, at homes or in Parks – is all that it takes to make persons with Down syndrome as much a part of society as everyone else. 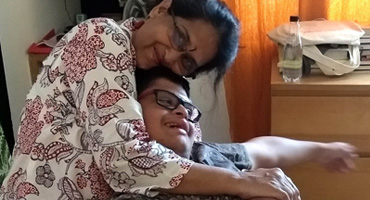 Sharing a big moment of Jijo!

Government has regulations for persons with disability during the lockdown. How many follow it?